Carry On: A Story of Resilience, Redemption, and an Unlikely Family (Paperback) 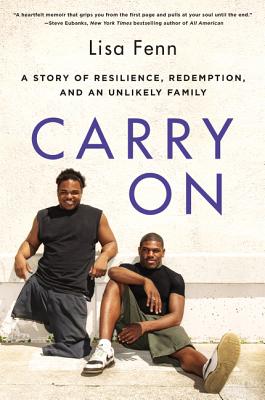 NAACP Image Award Finalist, and Winner of the 2016 Friends of American Writers Literary Award and the Christopher Award

A deeply moving memoir about the unexpected bonds that would transform three lives.

Lisa Fenn produced human-interest features for ESPN for over a decade, but one particular story came into her life and never left. After seeing a newspaper image of two young wrestlers from one of Cleveland’s tougher public high schools, Lisa followed a hunch and flew back to her hometown to meet the boys that very day. What she found caused her spirit both to sink and to soar.

Leroy Sutton, who lost his legs in a childhood train accident, could often be found riding on the back of Dartanyon Crockett, who was legally blind and had no permanent place to call home. Initially drawn together by their handicaps, the boys soon developed a brother-like bond. When one wrestled, the other sat on the edge of the mat, and their cheerful friendship was a source of inspiration throughout the halls of their high school.

As Lisa filmed her feature about this remarkable friendship for ESPN, she grew to understand the suffering Leroy and Dartanyon had endured, and she fought for their trust and their confidence. The three formed a surprising and meaningful connection—and once the television story ended, Lisa realized she couldn’t just walk away.

Though Leroy’s and Dartanyon’s futures were limited by abject poverty, Lisa resolved to give them the chance she knew they deserved. She worked tirelessly to see them through school and athletic pursuits, broken hearts, phantom limbs, and the bewildering obstacles that, at every turn, tested their individual strengths even while strengthening the bonds between them.

More than a story of two underdogs overcoming innumerable hardships, Carry On is a touching tale of an unlikely family forged through barriers of race, class, and disability. It is a powerful memoir about grit, love, hope, and faith—and the courage to carry on, even in the most extraordinary circumstances.

A three-time winner of the Edward R. Murrow Award and a six-time Emmy Award—winning feature producer with ESPN for thirteen years, LISA FENN interviewed every big name in sports. Today she is a sought-after public presenter, speaking on leadership, poverty, and transracial adoption, in addition to her Christian faith and its relevance in both her media career and her daily life. Lisa received her BS in communications from Cornell University. Her work has been featured on ESPN, Good Morning America, and World News Tonight. She continues to produce sports stories and write about the redemptive power of love. Lisa resides in Boston with her husband and two young children.

“A poignant memoir by an ex-ESPN producer who befriended two disabled inner-city wrestlers as they struggled to rise..” — Sports Illustrated

“An engrossing tale that is equal parts despair, hope and triumph.” — Ohio Magazine

“Carry On is a surprising book, not only due to the tremendous hearts within these two young men, but because the failures and triumphs in their stories don’t align with typical narrative rhythms. They arise suddenly, jaggedly, too often shatteringly, as occurs in real life. And as in real life, the moments of understanding, of healing, of unbounded joy will astonish you with the scope of their power.” — Jeff Hobbs, author of the New York Times bestseller The Short and Tragic Life of Robert Peace

“A profoundly moving memoir about two boys who become men in the face of life’s toughest challenges: disability, poverty, and torn families. We see the many ways in which one person can carry another, and we are inspired to do the same.” — Tim Howard, author of the New York Times bestseller The Keeper

“‘If you want something you never had, you must be willing to do something you’ve never done.’ This is the philosophy of Carry On, an astonishingly beautiful tale about the love we never knew we could experience. And like The Blind Side or Same Kind of Different As Me, Lisa Fenn’s work forces us to reframe our definition of family. By the end, Leroy, Dartanyon, and Lisa had me asking the question that prods us to be better humans: What would you do for a friend?” — Kevin Salwen, author of The Power of Half

“Great sports stories are never about sports. They are always about the trials and triumphs of the human spirit, regardless of the numbers on a scoreboard. No one knows that better than Lisa Fenn, whose heartfelt memoir of faith and the creation of an unlikely family grips you from the first page and pulls at your soul until the end. You need never have watched a second of wrestling, or any sport for that matter, to love this story, and to admire the woman who wrote it.” — Steve Eubanks, New York Times bestselling author of All American

This feature require that you enable JavaScript in your browser.
END_OF_DOCUMENT_TOKEN_TO_BE_REPLACED