The Pirates Laffite: The Treacherous World of the Corsairs of the Gulf (Paperback) 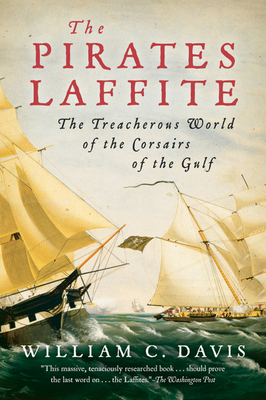 An “engrossing and exciting” account of legendary New Orleans privateers Pierre and Jean Laffite and their adventures along the Gulf Coast (Booklist, starred review).

At large during the most colorful period in New Orleans' history, from just after the Louisiana Purchase through the War of 1812, privateers Jean and Pierre Laffite made life hell for Spanish merchants on the Gulf.

Pirates to the US Navy officers who chased them, heroes to the private citizens who shopped for contraband at their well-publicized auctions, the brothers became important members of a filibustering syndicate that included lawyers, bankers, merchants, and corrupt US officials. But this allegiance didn't stop the Laffites from becoming paid Spanish spies, disappearing into the fog of history after selling out their own associates.

William C. Davis uncovers the truth about two men who made their names synonymous with piracy and intrigue on the Gulf.

The author of more than forty books, WILLIAM C. DAVIS is the director of programs at the Virginia Center for Civil War Studies. He is also chief consultant for the A&E television series Civil War Journal and teaches history at Virginia Tech.

PRAISE FOR AN HONORABLE DEFEAT
"Once again [William C. Davis] has reminded us that American history is not all black and white, or blue and gray-that, especially within the doomed Confederacy, the shading of character ran from nobility to absurdity." -THE WASHINGTON POST BOOK WORLD

"A story rich in pathos and humor." -THE NEW YORK TIMES BOOK REVIEW

This feature require that you enable JavaScript in your browser.
END_OF_DOCUMENT_TOKEN_TO_BE_REPLACED