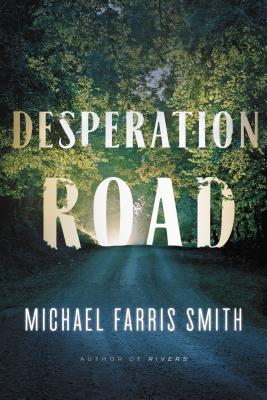 By Michael Farris Smith
$26.00
Email or call for price.

“Russell, just released from an 11-year prison sentence, finds anger and revenge waiting for him on the outside. Maben, homeless, broken, and walking along the interstate in the blazing Mississippi heat toward McComb, is forced to make a decision that puts her and her young daughter on the run from the police. In a desperate moment of chance or fate, Russell and Maben's paths cross, their shared past is revealed, and Russell is left to make the ultimate choice. Smith's novel is mesmerizing from its opening pages; you will have to pace yourself while reading it to fully enjoy and appreciate the pitch-perfect language and descriptions that can only come from one who has a masterful command of storytelling.”
— Matt Kelly (W), Lemuria Bookstore, Jackson, MS

“Russell and Maben are at the end of their respective ropes, and when their paths collide one day in the pine barrens of southern Mississippi, only two options remain: endless violence or salvific retribution. Along the way, they bump against a memorable cast of characters equally scarred by past sins and the legacy of cruelty. Forget the labels ‘Southern Gothic,’ ‘antihero drama,’ or ‘literary noir.’ With Desperation Road, Michael Farris Smith arrives triumphantly on the American literary landscape—a landscape striped with dark dirt roads and the redemptive freedom of the interstate.”
— Steve Iwanski, Turnrow Book Company, Greenwood, MS

In the vein of Daniel Woodrell's Winter's Bone and the works of Ron Rash, an Amazon Best Book of the Month set in a tough-and-tumble Mississippi town where drugs, whiskey, guns, and the desire for revenge violently intersect.

For eleven years the clock has been ticking for Russell Gaines as he sits in Parchman Penitentiary in the Mississippi Delta. His sentence is now up, and he believes his debt has been paid. But when he returns home, he soon discovers that revenge lives and breathes all around him. On the same day that Russell is released from prison, a woman named Maben and her young daughter trudge along the side of the interstate under the punishing summer sun.

Desperate and exhausted, the pair spend their last dollar on a room for the night, a night that ends with Maben running through the darkness holding a pistol, and a dead deputy sprawled in the middle of the road in the glow of his own headlights. With the dawn, destinies collide, and Russell is forced to decide whose life he will save -- his own or those of the woman and child. Delivered in powerful and lyrical prose, Desperation Road is a story of troubled souls twisted with regret and bound by secrets that stretch over the years and across the land.

Michael Farris Smith is the author of The Fighter, Desperation Road, Rivers, and The Hands of Strangers. His novels have appeared on Best of the Year lists with Esquire, Southern Living, Book Riot, and numerous others, and have been named Indie Next List, Barnes & Noble Discover, and Amazon Best of the Month selections. He has been a finalist for the Southern Book Prize, the Gold Dagger Award in the UK, and the Grand Prix des Lectrices in France, and his essays have appeared with The New York Times, Bitter Southerner, Writer's Bone, and more. He lives in Oxford, Mississippi, with his wife and two daughters.


"Desperation Road is an elegantly written, perfectly paced novel about a man and woman indelibly marked by violence. Characters who would be mere stereotypes in a lesser writer's hands are fully realized, and we come to care deeply as they attempt to create a better life for themselves. An outstanding performance."—Ron Rash

"Michael Farris Smith is one of the best writers of his generation, and this very well may be his best work--taut, tense, and impossible to put down."—Tom Franklin, author of Crooked Letter, Crooked Letter

"Michael Farris Smith's Desperation Road reads as if it were forged in a fire stoked by the ghosts of Carson McCullers, Larry Brown, and William Gay. The result is a novel rife with violent beauty and incredible grace. Smith's terse, muscular prose encapsulates a heart that renders this novel as rich and alive and wounded as any you'll find in contemporary fiction."
—Wiley Cash, New York Times bestselling author of A Land More Kind Than Home and This Dark Road to Mercy

"Anchored by prose that is both poetic and brutal, Desperation Road is a gorgeous and violent book. But don't be fooled by the title. Michael Farris Smith's novel teems with the honest and believable humanity that only the bravest writers dare to search for in the most troubled souls."—Ivy Pochoda, author of Visitation Street

"Michael Farris Smith taps into the rhythm of a world I know, and he does it so well, with such ease, that it's almost like I'm living it instead of reading it. His anti-heroes teeter always between the drag-out skids and sweet redemption, and they create a beautiful, true tension that makes this novel burn and thrum in your hands."—Jamie Kornegay, author of Soil

"A novel that lends dignity and grace to those too often damned, DESPERATION ROAD is fearless, guttural, and thunderously heartfelt. Quite simply one of our finest writers at work today, Michael Farris Smith has made his own place at the table."
—David Joy, author of Where Light Tends to Go

"This book tore at my heart and infected my brain. It reminded me how powerful literature can be, and how often it falls short. Michael Farris Smith is a huge talent."
—Richard Grant, author of Dispatches from Pluto

"Desperation Road is a brilliantly compelling novel dealing with an enormously difficult but fundamental reality of the human condition: how lives lived intensely for years without connection to or even knowledge of each other can suddenly intersect with profound consequences. Michael Farris Smith is a prodigiously talented writer whose new book is not only an exciting read but an important literary event."
—Robert Olen Butler, author of A Small Hotel

"Smith writes shapely prose and sharp dialogue and everywhere displays an acute sense of the moments and pain that can define lives in a small town."
—Kirkus (starred review)

"Smith is a meticulous craftsman who evokes his protagonists and their world with patience and subtlety. Ultimately, the road of the novel's title moves just through desperation, but also into a tentative landscape of hope, and perhaps even redemption."—Publishers Weekly

"The book is elegant, even profound, the cadence of the words alluring, bringing the reader deeper into this world of gray.... Amidst this, there is a glimmer of hope to lead them into brightness again."—The Clarion-Ledger

"Dazzling.... Smith is incredibly gifted; emotion and poetry soak his straightforward prose, its easy flow masking the precision behind every word. He imbues the everyday slog of difficult lives with reverence and grace, painting the faintest glimmer of hope in opportunities lost and prices paid for flying too close to the web."
—Shelf Awareness

"Put the name Michael Farris Smith on your must-read list.... Desperation Road doesn't meet or exceed expectations so much as blows the doors, windows and roof off the house in which it lives. It's a book for which you'll want to set aside everything else."
—Book Reporter

"Smith writes in spare, sharply observed language, like a more colloquial take on Cormac McCarthy.... The steady accumulation of phrases in Smith's prose conveys a sense of control even as the characters' lives seem marked by random misfortune."
—Atlanta Journal Constitution

"Elegant prose and masterful storytelling transform this tale into a work of literary art.... The author's skills are apparent on every page. The simplicity and clarity of the writing underlie and enhance his uncanny ability to unerringly depict a scene. The Southern, small town locale is so artfully described that when lightening strikes, the reader flinches."
—Pittsburgh Post-Gazette

This feature require that you enable JavaScript in your browser.
END_OF_DOCUMENT_TOKEN_TO_BE_REPLACED