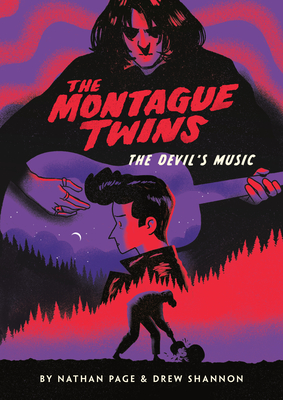 This is book number 2 in the The Montague Twins series.

Alastair, Pete, Charlie, and Rachel aren't just magical teen detectives in their coastal town of Port Howl--they are also members of a local teen rock band. Before a show one night, Charlie and Rachel meet a famous rockstar, Gideon, and invite him to their show. He'll never come, but why not try, right?

Little do they know, Gideon does show up, and he brings the threads of his dark past with him. In fact, he might even be the source of the rumored Devil's Music, a limited-release song that entrances all of its listeners in a deadly hypnosis.

When Pete quickly gets drawn into Gideon's web, it's up to his brother and friends to save him. But Pete might not be the only Montague Twin at risk for Gideon's spell...

A writer of graphic novels and lover of 90s soundtracks, Nathan Page lives in Toronto, where the streets are never finished and the raccoons are definitely not messing around. His works include The Montague Twins: The Witch’s Hand, The Montague Twins: The Devil’s Music, and Who Was the First Man on the Moon?: Neil Armstrong.
Drew Shannon is a Toronto-based illustrator born in London, Ontario, who moved after graduating from Sheridan's illustration program in 2011. Some of his clients include the Globe and Mail, the Washington Post, Reader's Digest, NPR, UNICEF, and more. His first children's book, Extreme Battlefields, with author Tanya Lloyd Kyi, was published in 2016 by Annick Press. See more of his work at drewshannon.ca.

This feature require that you enable JavaScript in your browser.
END_OF_DOCUMENT_TOKEN_TO_BE_REPLACED