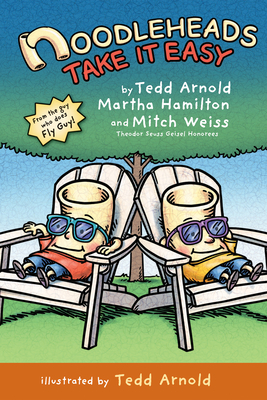 This is book number 7 in the Noodleheads series.

Taking it easy is easy peasy, until Mac and Mac give it a try! This colorful graphic novel will have 1st and 2nd grade independent readers laughing out loud at Noodleheads’ funny adventures.

Mac and Mac want to take it easy and eat their favorite pie, but making pie isn’t as easy as eating it! Or is it? Along the way they their friends and mom give them tricks to make it as easy as…well pie! But the boys’ shenanigans make things harder than they need to be. Will Mac and Mac get to have their pie and eat it too?

This seventh book in the Noodleheads graphic novel series is perfect for comic fans and reluctant readers. Short chapters--full of wordplay, jokes, and slapstick humor--follow Mac and Mac through their funny adventures. It is co-written and illustrated by Tedd Arnold, known for his popular Fly Guy series.

Based on traditional world folktales and stories of fools, the Noodleheads encourage critical thinking. They invite readers to use their noodles to spot holes in the brothers' grand plans. Source notes by co-authors Martha Hamilton and Mitch Weiss, professional storytellers known as Beauty and the Beast, provide information about the traditional stories that inspired Mac and Mac's mishaps and give suggestions for further reading.

This easy-to-read series, including the Geisel Honor book Noodleheads See the Future, is an accessible introduction to stories of fools, and a great next read for fans of the Fly Guy books.

Tedd Arnold is the best-selling author-illustrator of the Fly Guy series, with two Theodor Seuss Geisel Award Honor books and more than 18.5 million books in print. He is author and illustrator of Dirty Gert, Vincent Paints His House, and Fix This Mess, an I Like to Read book. He is co-author and illustrator of the Noodleheads series, including Noodleheads See the Future, a Theodor Seuss Geisel Award Honor Book, an American Library Association Notable Book, and winner of the American Folklore Society's Aesop Prize.

Martha Hamilton and Mitch Weiss are acclaimed storytellers who have won an Irma Simonton Black Award for Excellence in Children's Literature, two Storytelling World Awards, and an Anne Izard Storytellers' Choice Award. With Tedd Arnold, they are co-authors of the Noodleheads series, including Noodleheads See the Future, a Theodore Seuss Geisel Award Honor Book, an American Library Association Notable Book, and winner of the American Folklore Society's Aesop Prize.

"Young readers unfamiliar with the titular characters' previous exploits will have no problem understanding the zany humor, and mature readers will love the backmatter, which traces the history of each story's inspirations. Arnold's bold artwork, depicting characters with bulging eyes and oversize bodies on tiny legs, remains a classic vehicle for capturing the wackiness of the tales, and fans of this pair's adventures will welcome this latest addition with giggles galore. . . . Sweet as pie!"—Kirkus Reviews

This feature require that you enable JavaScript in your browser.
END_OF_DOCUMENT_TOKEN_TO_BE_REPLACED