The Art of Place: Architecture and Interiors (Hardcover) 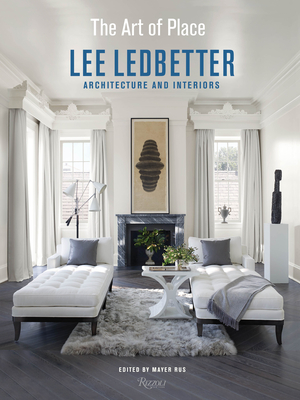 The first book from this celebrated American designer and architect known for creating spaces that balance historic detail and modern elegance.

The work of architect and interior designer Lee Ledbetter represents a one-of-a-kind combination of traditional details and chic Modernism. Lee Ledbetter established his practice in New Orleans in 1996 and has developed a body of work that emerges from his ability to incorporate historical precedent as well as regional and environmental context, and his firm has received recognition for its expertise well beyond its Deep South roots. Ledbetter's interiors and architecture combine a cleanly tailored and bright modernity with the unapologetic embellishments of refined and luxurious decoration. Ledbetter strongly believes design to be a fine art along with painting and sculpture, and he considers placement and scale of furniture, artwork, and lighting as carefully as he does the creation of walls and the spaces they contain. As Mayer Rus, who provides the text for this title, once wrote in House & Garden, "Lee Ledbetter rejects the idea that a serious architect cannot be a dedicated decorator as well."

Lee Ledbetter is an architect and interior designer based in New Orleans. He founded Lee Ledbetter & Associates in 1996.

Mayer Rus is the West Coast editor of Architectural Digest.

"It is rare to find a professional at his level who actively commands the skills of both serious architect and intuitive interior designer, which serves as the premise for his soon-to-be-released book, Art of Place which is available for pre-order now." —LA DOLCE VITA

"Like New York, New Orleans is very much a city of neighborhoods--there are actually 73 of them here--and each is rife with opportunties to restore, renovate, and rebuild," says the Louisiana native whose first book, The Art of Place, was published by Rizzoli in March." —DEPARTURES

"It’s long been one of the topics of interior design—whether the discipline is an art form or a craft. Fortunately, that debate is answered here. FYI: Interior design is decidedly an art form, especially when practiced by Lee Ledbetter, who has been based in New Orleans since 1996. This volume reveals his uncanny ability to create interiors that speak to his Southern heritage, while addressing whatever the locale of the particular project. Every room he creates is a careful composition—something not out of a museum, but of a home." —MILIEU MAGAZINE

This feature require that you enable JavaScript in your browser.
END_OF_DOCUMENT_TOKEN_TO_BE_REPLACED