The Gulf: The Making of An American Sea (Hardcover) 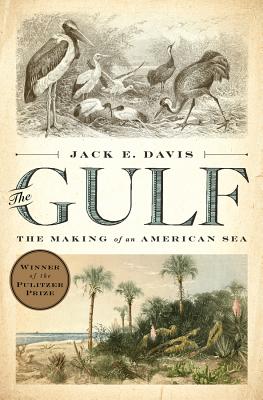 Winner of the 2018 Pulitzer Prize for History

Winner of the 2017 Kirkus Prize for Nonfiction

One of the Washington Post's Best Books of the Year

When painter Winslow Homer first sailed into the Gulf of Mexico, he was struck by its "special kind of providence." Indeed, the Gulf presented itself as America’s sea—bound by geography, culture, and tradition to the national experience—and yet, there has never been a comprehensive history of the Gulf until now. And so, in this rich and original work that explores the Gulf through our human connection with the sea, environmental historian Jack E. Davis finally places this exceptional region into the American mythos in a sweeping history that extends from the Pleistocene age to the twenty-first century.

Significant beyond tragic oil spills and hurricanes, the Gulf has historically been one of the world's most bounteous marine environments, supporting human life for millennia. Davis starts from the premise that nature lies at the center of human existence, and takes readers on a compelling and, at times, wrenching journey from the Florida Keys to the Texas Rio Grande, along marshy shorelines and majestic estuarine bays, profoundly beautiful and life-giving, though fated to exploitation by esurient oil men and real-estate developers.

Rich in vivid, previously untold stories, The Gulf tells the larger narrative of the American Sea—from the sportfish that brought the earliest tourists to Gulf shores to Hollywood’s engagement with the first offshore oil wells—as it inspired and empowered, sometimes to its own detriment, the ethnically diverse groups of a growing nation. Davis' pageant of historical characters is vast, including: the presidents who directed western expansion toward its shores, the New England fishers who introduced their own distinct skills to the region, and the industries and big agriculture that sent their contamination downstream into the estuarine wonderland. Nor does Davis neglect the colorfully idiosyncratic individuals: the Tabasco king who devoted his life to wildlife conservation, the Texas shrimper who gave hers to clean water and public health, as well as the New York architect who hooked the “big one” that set the sportfishing world on fire.

Ultimately, Davis reminds us that amidst the ruin, beauty awaits its return, as the Gulf is, and has always been, an ongoing story. Sensitive to the imminent effects of climate change, and to the difficult task of rectifying grievous assaults of recent centuries, The Gulf suggests how a penetrating examination of a single region's history can inform the country's path ahead.

Jack E. Davis is the author of the award-winning The Gulf: The Making of An American Sea and An Everglades Providence: Marjory Stoneman Douglas and the American Environmental Century. A professor of environmental history at the University of Florida, he lives in Florida and New Hampshire.

A sensitive and sturdy work of environmental history. . . . [Davis] has a well-stocked mind, and frequently views the history of the Gulf through the prism of artists and writers including Winslow Homer, Wallace Stevens, Ernest Hemingway and John D. MacDonald. His prose is supple and clear. . . . A cri de coeur about the Gulf’s environmental ruin.
— Dwight Garner - New York Times

A wide-ranging, well-told story, by turns informative, lyrical, inspiring and chilling for anyone who cares about the future of ‘America’s Sea.’
— Gerard Helferich - Wall Street Journal

This scholarly magnum opus is quite long, but it reads like a novel. Students of writing, history, ecology and the environment will be riveted by this book, and I think it should be required reading for every American, especially those in the White House. If you read only two books about the environment this year, make this one of those two.
— Forbes

In the tradition of Jared Diamond's best-seller Collapse and Simon Winchester's Atlantic comes Jack E. Davis' nonfiction epic, The Gulf: The Making of an American Sea, which strives both to celebrate and defend its subject—the Gulf of Mexico. . . . Detailed and exhaustive, written in lucid, impeccable prose, The Gulf is a fine work of information and insight, destined to be admired and cited.

Splendid . . . . Davis is a historian, and this book is packed with research, but The Gulf does not read like a textbook. He is a graceful, clear, often lyrical writer who makes sometimes surprising, always illuminating connections—it's not a stretch to compare him to John McPhee. And he is telling an important story, especially for those of us who live around what he calls the American Sea. What happens to it happens to us, and the more we know, the better equipped we'll be to deal with a future on its shores.

An incisive, comprehensive and entertaining portrait of the world’s most diverse and productive marine ecosystems—from its lusty birth in the chaos of shifting continental plates to its slow and agonizing death of a million cuts inflicted by oil and gas extractors, dredge-and-fill operators, ‘condo-canyon’ developers, industrial-scale fishers, fertilizer-dependent farmers, chemical plant entrepreneurs, love-it-to-death snow birds and so many more. . . . Amid all of the pollution and exploitation, this could easily have been a grim history of ‘Paradise Lost.’ But in Davis’ skilled hands it as much love story as tragedy.
— Ron Cunningham - Gainesville Sun

Jack Davis has delivered a unique and illuminating history of the American Southern coast and sea as it should be written: how humanity and the environment evolved over ten millennia as a single system.
— Edward O. Wilson, author of The Social Conquest of Earth

This vast and well-told story shows how we made the Gulf of Mexico, in particular, into what local activists have begun to call a 'national sacrifice zone,' at enormous cost to its residents of all species. It’s a sobering tale, and one hopes that reading it will help us hit bottom and acknowledge the need to change.
— Bill McKibben, author Eaarth: Making a Life on a Tough New Planet

A tremendous book. Davis is not only one of our preeminent environmental historians, but also a first-rate storyteller and prose stylist. Lay readers and scholars alike will be delighted by The Gulf, a lovely evocation of the natural world and the problematic ways our nation has profited from it.

Hunt's compact book should serve as the first port of call for students and general readers interested in how historians have interpreted and reinterpreted the emergence of the world around them.
— Mark Kurlansky, author of Paper: Paging Through History

Like its subject, The Gulf is big, beautiful, and beguiling. Meticulously researched and sparklingly written, it is also a cautionary tale about a paradise ill-served by humankind.

— William Souder, author of On a Farther Shore

Hunt has…the most reliable eye for new trends in the American historical profession, and what she considers important always amounts to more than the sum of her current enthusiasms…she has a preternatural sense of the new new thing being touted by historians to study old things.
— Darcy Frey, Harvard University

No one has a better nose for historical trends than Lynn Hunt. Her short, sharp book offers an inspiring declaration of interdependence for historians—to understand the global present collaboratively, using all our tools to unscramble the entangled past.
— Cynthia Barnett, author of Rain: A Natural and Cultural History

With characteristic concision and lucidity, Lynn Hunt takes on the methodological dilemmas facing all historians today…A thought-provoking snapshot of where historians stand now and where they might be headed. Lively and engaging, this book will help both budding and seasoned historians understand the current state of their discipline.
— Jordan Fisher Smith, author of Engineering Eden and Nature Noir

The Gulf starts with the geology of plate tectonics, proceeds through Indian settlements before the arrivals of Europeans, advances to hurricanes, the Dead Zone, and oil pollution, then analyzes the future. And it does all this very, very well. Books which attempt such comprehensive treatments of a subject are too often, as the saying goes, a mile wide and an inch deep. This book is 1,000 miles wide and 10,000 feet deep. It's an extraordinary achievement.

Vivid. . . . As Davis demonstrates in this absorbing narrative, the history of the Gulf teaches us that nature is most generous whenever we respect its sovereignty.
— Henry L. Carrigan - Bookpage

A perceptive historical survey of America’s Gulf Coast, this fascinating work accents the region’s nexus between nature and civilization. . . . Marked by thorough knowledge and fluid writing, this work will enhance any collection of American and environmental history.
— Gilbert Taylor - Booklist, Starred review

This feature require that you enable JavaScript in your browser.
END_OF_DOCUMENT_TOKEN_TO_BE_REPLACED