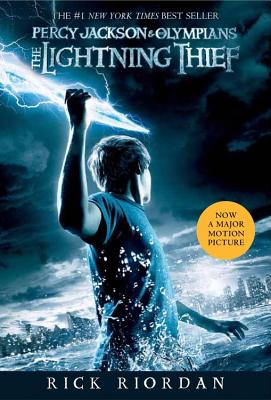 Percy Jackson is about to be kicked out of boarding school...again. And that's the least of his troubles. Lately, mythological monsters and the gods of Mount Olympus seem to be walking straight out of the pages of Percy’s Greek mythology textbook and into his life. And worse, he’s angered a few of them. Zeus’s master lightning bolt has been stolen, and Percy is the prime suspect.


Now Percy and his friends have just ten days to find and return Zeus’s stolen property and bring peace to a warring Mount Olympus. But to succeed on his quest, Percy will have to do more than catch the true thief: he must come to terms with the father who abandoned him; solve the riddle of the Oracle, which warns him of betrayal by a friend; and unravel a treachery more powerful than the gods themselves. With cover art from the major motion picture, this first installment of Rick Riordan's best-selling series is a non-stop thrill-ride and a classic of mythic proportions.


Rick Riordan is the author of all five books in the New York Timesbest-selling Percy Jackson and the Olympians series: The Lightning Thief; The Sea of Monsters; The Titan's Curse;The Battle of the Labyrinth; and The Last Olympian. His previous novels for adults include the hugely popular Tres Navarre series, winner of the top three awards in the mystery genre. He lives in San Antonio, Texas, with his wife and two sons.

This feature require that you enable JavaScript in your browser.
END_OF_DOCUMENT_TOKEN_TO_BE_REPLACED