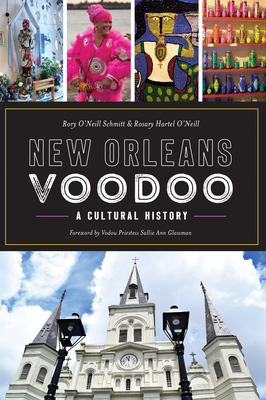 The Voodoo tradition continues in the Crescent City even today. Rory Schmitt and Rosary O'Neill study the altars, art, history and ceremonies that anchor Voodoo in New Orleans culture.

There is no more compelling nor more spiritual city than New Orleans. The city's Roman Catholic roots and its blended French, Spanish, Creole and American Indian populations heavily influenced the rites and rituals that West Africans brought to Louisiana as enslaved laborers. The resulting unique Voodoo tradition is now deeply rooted in the area. Enslaved practitioners in the nineteenth century held Voodoo dances in designated public areas like Congo Square but conducted their secret rituals away from the prying eyes of the city. By 1874, some twelve thousand New Orleanians attended Voodoo queen Marie Laveau's St. John's Eve rites on the shores of Lake Pontchartrain. The Voodoo tradition continues in the Crescent City even today.

This feature require that you enable JavaScript in your browser.
END_OF_DOCUMENT_TOKEN_TO_BE_REPLACED