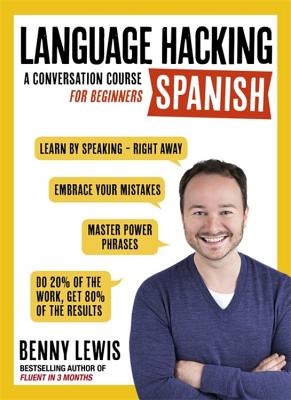 Crack the Code and Get Fluent Faster!

'Ten years ago, Lewis spoke only English. But constant travel, along with a buoyant attitude, has unmasked the polyglot within.'
-National Geographic

#LanguageHacking is a state of mind. It's about ditching excuses, using shortcuts and taking risks. It's about learning what's indispensable, skipping what's not - and most importantly speaking from day one!

How's it different?
Unlike traditional language courses that are organized by level of difficulty, #LanguageHacking Spanish focuses on the language and conversations you need to master so you can start speaking immediately, not after years of study.

Free access to the #LanguageHacking community, custom created by italki, a ground-breaking website that makes it possible to learn a new language without going abroad.

Irish native Benny Lewis speaks over ten languages - all self-taught. In 2003, he spoke only one language: English. After university, he moved to Spain and was soon frustrated that he could not speak Spanish after six months of studying. So he decided to abandon traditional learning approaches and just start speaking - and everything changed. Today Benny is known as The Irish Polyglot and speaks Mandarin Chinese, Arabic, French, German, Spanish, Italian, Portuguese, and Hungarian. He is the author of the bestselling book on language learning, Fluent in 3 months. He also runs the largest language learning blog in the world, www.fluentin3months.com, where he breaks down the language learning process for busy people. Lewis is a full-time 'language hacker', and devotes his time to finding better, faster, and more efficient ways to learn languages. For the first time, he has applied his methods to helping people learn specific languages in his new Language Hacking series.

"Benny Lewis is the Eckhart Tolle of language learning."—the Guardian

"Benny was fantastic. He lived up to everything. He had the students asking question after question. We had over 100 students packed in the auditorium. Considering we were up against another event on campus, that is pretty awesome. His intro video was great, his presentation was spot on. We appreciated him spreading the word to travel on our programs, but getting the students engaged to travel anywhere in the world."—Lock Haven University

"Inspiring and epic words. Everyone left that speech with a new sense of purpose for not just learning, but living a new language."—Trivago

"Lewis' focus on the benefit to business of multilingual language ability is striking a resonant chord."—Forbes

"Our conference was by far Poland's most successful one yet, an accomplishment owing in large part to the enthusiasm, inspiration, and knowledge brought to the stage by Mr. Lewis."—TEDx Warsaw

"Ten years ago, Lewis spoke only English. But constant travel, along with a buoyant attitude, has unmasked the polyglot within."—National Geographic

"a polyglot viral sensation... eager to show people that the best way to learn is by conversing."—MSN

This feature require that you enable JavaScript in your browser.
END_OF_DOCUMENT_TOKEN_TO_BE_REPLACED