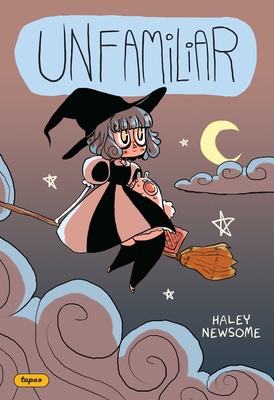 Based on the wildly popular webcomic from Tapas, Unfamiliar is an endearing and whimsical story full of magical mayhem, offbeat outsiders, and the power of friendships and found family.

Young kitchen witch Planchette gets an incredible deal on a new house in a magical town. Turns out, there's a reason: it's haunted! After unsuccessfully attempting to get these unwanted ghosts to leave, she realizes the only thing to do is to help them with their problems. Along the way, she befriends a shy siren who hates being popular, a girl battling a curse, and a magically-challenged witch from a powerful coven.

Haley Newsome is also known as the ultra-popular influencer LavenderTowne with more than 1.6 million subscribers on Youtube and 280k followers on Instagram. Haley writes and drawns tow comics, Unfamiliar and Disasterpiece.

Planchette the witch tries to rid her new house of ghosts in this debut graphic novel based on the author’s popular webcomic.

Planchette and her rabbit familiar, Winston, got a great deal on a new place, probably because it’s haunted. Planchette is just a kitchen witch—she’s excellent at food magic—so she needs help with an exorcism of her new house. Searching the town for assistance, Planchette meets fellow witch Pinyon and her bird familiar, Ari, but Pinyon isn’t great at exorcism magic either, despite coming from a family of powerful witches. Thankfully, they run into grumpy loner Sun and pink-haired, half-siren Babs with her cyclops cat, Marlow, who complete their new group of friends. Together, the witches try various ways to help the ghosts in Planchette’s new home move on to the next life, along the way solving their own problems, like curses and tense family dynamics. Planchette and friends are immediately intriguing, drawn with expressive, cartoony eyes and quirky, charming designs. Newsome takes advantage of the graphic format to land countless visual jokes and imbue the world with personality and whimsy. All human characters have light skin although they vary in hair color.

In this quirky graphic novel by Newsome, originally a webcomic, humble young kitchen witch Planchette couldn’t be more excited about her big move, until she discovers that her new, giant skull-shaped home is haunted. Together with her rabbit familiar, Winston, Planchette sets off to recruit help evicting the spectral squatters. While exploring town, she meets skittish witch Pinyon and her bird familiar, Ari, who agree to assess the situation. But when Pinyon’s attempts to exorcize the ghosts result in her fearful retreat, she and Planchette turn to website Witchyhow for advice. As the two try myriad methods to expel the ghouls to varying degrees of failure, they worry that Planchette’s home will be haunted forever. Newsome’s worldbuilding cleverly toes the line between sweet and eerie, and the creator’s playful, exaggerated cartoonlike style handily conveys the more harrowing story elements—such as lovers torn apart by murder and the young twins who haunt Planchette’s house—in a way that feels cozy and warm, despite the ghosts’ tragic ends. Most characters appear white. Ages 13–17. (Nov.) (Publishers Weekly, Publishers Weekly)

This feature require that you enable JavaScript in your browser.
END_OF_DOCUMENT_TOKEN_TO_BE_REPLACED