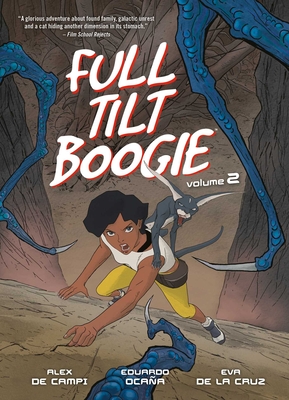 This is book number 2 in the Full Tilt Boogie series.

Tee is a teen on the edge. The edge of burnout, the edge of bankruptcy, and now the edge of the universe, the only place she, her grandma, their cat, and their ship of refugees and runaways will be safe from the vengeful might of the Luxine Empire. Desperately seeking a place she and her found family will be safe, she once more takes on a job that no one else will do - a dangerous trek to the heart of a mysterious ship in order to bring back a crystal of incredible power.

The second volume of Alex De Campi and Eduardo Ocaña's critically acclaimed space opera is a profound statement on growing up, growing old, and bravery in the face of insurmountable odds.

Alex de Campi's mostly-indie career stretches from her Eisner-nominated debut Smoke (Dark Horse) through recent Eisner nominees Bad Girls (Gallery 13) and Twisted Romance (Image). Plus company work: she's killed off most of Riverdale, twice, in Archie vs Predator I & II. Her next projects are YA adventure The Backups (Imprint / MacMillan, 2020) and a thriller with director Duncan Jones. Catch her YA adventure Reversal on her Patreon, and action-thriller Bad Karma on Panel Syndicate. She also writes for TV and film (the Blade Runner anime & more). She is on social media as @alexdecampi and lives in Manhattan.

Eduardo Ocaña was born in Madrid, in 1974. He finished his studies in Technical Architecture at the Polytechnic University of Madrid. Those days, he was in a hardcore punk band too. He was Professor of Art in several academies and has have taught drawing courses for design companies. He has been working for more than 15 years as a comic book artist in the Franco-Belgian market of Bande dessinée ,working with publishers like Les Humanoïdes Associés (on the book Messiah Complex with Alex de Campi), Casterman, Robinson or Delcourt. He has worked on the trilogy Les carnets de Darwin with Runberg for the Belgian publisher Le Lombard and has been part of the artists that have participated in Madi: Once Upon A Time In The Future, the sci-fi graphic novel by Duncan Jones and Alex de Campi. He still listens to punk rock music.

"A true all-ages solution for the kids who want the space adventuring 2000 AD serialized vibe without all of the hyper-violence, but without sacrificing complexity." - Comics Beat

"It’s a collection that reads so well, a perfect example of how to create a huge, galaxy-spanning epic from the ground up, full of fun, full of adventure, and never forgetting the importance of family – whatever that may be." - Comicon

"A glorious adventure about found family, galactic unrest, and a cat hiding another dimension in its stomach" - Film School Rejects

"A lushly illustrated sci-fi space opera, elevated by a narrative foundation built upon conveying the universal emotions we all experience as humans in any walk of life." - How To Love Comics

This feature require that you enable JavaScript in your browser.
END_OF_DOCUMENT_TOKEN_TO_BE_REPLACED