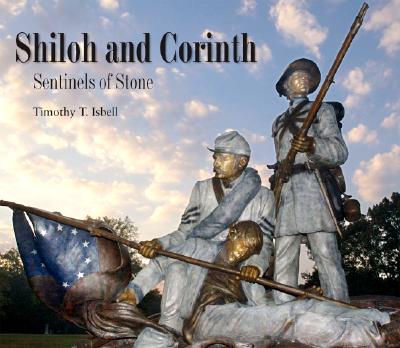 By Timothy T. Isbell (Photographer)
$40.00
Email or call for price.

On April 6 and 7, 1862, at Shiloh a desperate battle between surprised Union forces and attacking Confederates ushered in the carnage that would mark the Civil War. At the Hornet\'s Nest, in the Peach Orchard, across Rea\'s Field and Hell\'s Hollow more than 20,000 men were killed, wounded, or reported missing in the fierce fighting. There were more casualties in two days at Shiloh than in all previous American wars combined.

The Confederacy\'s defeat at Shiloh led to the Union occupation of Corinth, Mississippi, a crucial railhead for supplying campaigning armies. As part of the South\'s last great offensive in October 1862, Confederates tried but failed to retake this fortified town.

Shiloh and Corinth: Sentinels of Stone examines the brave deeds performed by soldiers of the North and South. Over 90 striking photographs and accompanying histories bring the battlefields to life, from Shiloh and Savannah, Tennessee, to Iuka and Corinth, Mississippi. The book chronicles the deaths of Albert Sidney Johnston and W. H. L. Wallace, the first victories of Ulysses S. Grant\'s military career, the failures of Earl Van Dorn, the torment of William Rosecrans, and the angst of Sterling Price. Shiloh and Corinth: Sentinels of Stone leads the reader to the present-day landscapes where America learned the Civil War would be long and bloody.

Timothy T. Isbell of Gulfport, Mississippi, is a photojournalist with the 2006 Pulitzer Prize-winning Sun Herald in Biloxi. He is a former photojournalist-in-residence at the University of Southern Mississippi and a Knight Foundation/National Endowment of the Arts recipient for his photographic study of the Vietnamese people of the Mississippi Gulf Coast. He is the author and photographer of Gettysburg: Sentinels of Stone and Vicksburg: Sentinels of Stone.

This feature require that you enable JavaScript in your browser.
END_OF_DOCUMENT_TOKEN_TO_BE_REPLACED