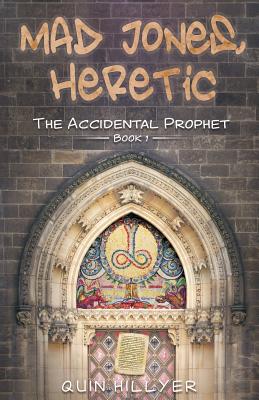 "I've been enjoying Quin Hillyer's columns for years, and when I read an early draft of Mad Jones, I told him it had real potential and to keep at it. Today's culture needs satirizing, and Hillyer does it with verve."--Winston Groom, author of Forrest Gump.

Meet Mad Jones, a high school history teacher who, in the midst of unspeakable tragedy, literally nails religious theses to church doors. He does so with no expectation that they will be taken seriously, or even widely read-but, in this age of modern electronic communications and instant celebrity, young Madison Jones very quickly develops a large following and engenders significant levels of controversy. The media, quite typically, misunderstand and misrepresent his ultimate message; religious leaders debate his theses, at times with ulterior motives; and soon politicians are jumping in to comment from whichever standpoint best fits their partisan purposes.

Mad Jones, Heretic delivers sharp satire on modern religion, politics, and media, all at the same time, along with insightful representations of the vagaries of today's celebrity culture and the lunacy of Internet comment threads. Controversies surrounding race and sexual morality enter in as well. Additionally, its setting at the end of the 20th Century, in the midst of the Y2K computer scare, provides the perfect vehicle to dissect millennialist themes as well.

Underlying all of this are some very serious theological reflections, woven naturally through a plot filled with sympathetic and memorable characters. Ultimately, true character-both good and bad-reveals itself, and both faith and human decency are tested once again. Grace and redemption, though, are always possible.

"Nobody knows religion, politics and the South better than Quin Hillyer. His riveting book of Southern literature takes the reader through Mobile, New Orleans and Washington D.C. to tell the story of a modern day Martin Luther that shakes a nation to its core. This novel may do the same to you."--Alex Pappas, veteran White House reporter

"I have had the privilege of reading Quin Hillyer for more than 25 years, and I love the way he tells a story. I'm sure readers of this book will agree."--Clancy DuBos, political columnist and owner of Gambit New Orleans Weekly

Quin Hillyer is a political columnist who has won journalism awards at the local, regional, and national levels. An inheritor of the literary tradition of his native New Orleans, Hillyer has led a fascinating professional life from sportswriter to congressional aide and candidate to now a Contributing Editor for National Review Online. He lives in Mobile, AL with his wife Tresy.

This feature require that you enable JavaScript in your browser.
END_OF_DOCUMENT_TOKEN_TO_BE_REPLACED