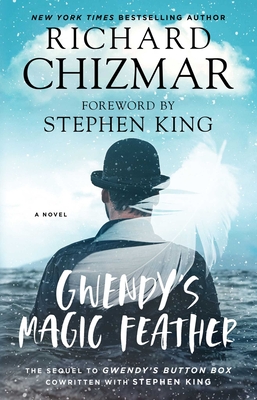 In this thrilling sequel to the New York Times bestselling novella by Stephen King and award-winning author Richard Chizmar, an adult Gwendy is summoned back to Castle Rock after the mysterious reappearance of the button box.

Something evil has swept into the small Maine town of Castle Rock on the heels of the latest winter storm. Sheriff Norris Ridgewick and his team are desperately searching for two missing girls, but time is running out.

In Washington, DC, thirty-seven-year-old Gwendy Peterson couldn’t be more different from the self-conscious teenaged girl who once spent a summer running up Castle Rock’s Suicide Stairs. That same summer, she had been entrusted—or some might say cursed—with the extraordinary button box by Richard Farris, the mysterious stranger in the black suit. The seductive and powerful box offered Gwendy small gifts in exchange for its care and feeding until Farris eventually returned, promising the young girl she’d never see the box again.

One day, though, the button box suddenly reappears but this time, without Richard Farris to explain why, or what she’s supposed to do with it. Between this and the troubling disappearances back in Castle Rock, Gwendy decides to return home. She just might be able to help rescue the missing girls and stop a dangerous madman before he does something ghastly.

With breathtaking and lyrical prose, Gwendy’s Magic Feather explores whether our lives are controlled by fate or the choices we make and what price we sometimes have to pay. Prepare to return again to Stephen King’s Castle Rock, the sleepy little town built on a bedrock of deep, dark secrets, just as it’s about to awaken from its quiet slumber once more.

Richard Chizmar is the coauthor (with Stephen King) of the New York Times bestselling novella, Gwendy’s Button Box and Gwendy’s Final Task. Recent books include The Girl on the Porch; The Long Way Home, his fourth short story collection; and Widow’s Point, a chilling tale about a haunted lighthouse written with his son, Billy Chizmar, which was recently made into a feature film. His short fiction has appeared in dozens of publications, including Ellery Queen’s Mystery Magazine and The Year’s 25 Finest Crime and Mystery Stories. He has won two World Fantasy awards, four International Horror Guild awards, and the HWA’s Board of Trustee’s award. Chizmar’s work has been translated into more than fifteen languages throughout the world, and he has appeared at numerous conferences as a writing instructor, guest speaker, panelist, and guest of honor. He is the author of Chasing the Boogeyman. Follow him on Twitter @RichardChizmar or visit his website at: RichardChizmar.com.

Stephen King is the author of more than sixty books, all of them worldwide bestsellers. His recent work includes Fairy Tale, Billy Summers, If It Bleeds, The Institute, Elevation, The Outsider, Sleeping Beauties (cowritten with his son Owen King), and the Bill Hodges trilogy: End of Watch, Finders Keepers, and Mr. Mercedes (an Edgar Award winner for Best Novel and a television series streaming on Peacock). His novel 11/22/63 was named a top ten book of 2011 by The New York Times Book Review and won the Los Angeles Times Book Prize for Mystery/Thriller. His epic works The Dark Tower, It, Pet Sematary, Doctor Sleep, and Firestarter are the basis for major motion pictures, with It now the highest-grossing horror film of all time. He is the recipient of the 2020 Audio Publishers Association Lifetime Achievement Award, the 2018 PEN America Literary Service Award, the 2014 National Medal of Arts, and the 2003 National Book Foundation Medal for Distinguished Contribution to American Letters. He lives in Bangor, Maine, with his wife, novelist Tabitha King.

“Chizmar carries the tale forward into Gwendy’s future with sympathy and grace. The result is at once an independent creation and a particularly intimate form of collaboration….Chizmar’s voice and sensibility dovetail neatly with [Stephen] King’s own distinctive style, and the book ultimately reads like a newly discovered chapter in King’s constantly evolving fictional universe.”
—The Washington Post

This feature require that you enable JavaScript in your browser.
END_OF_DOCUMENT_TOKEN_TO_BE_REPLACED