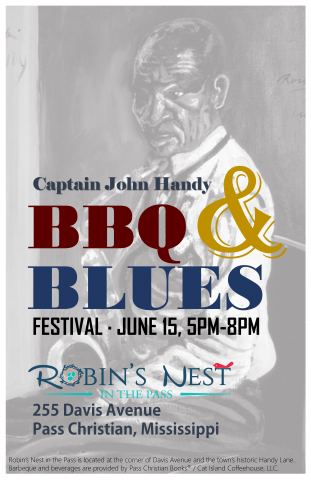 The first annual Captain John Handy Blues and Barbeque Celebration will be held on Saturday, June 15th from 5:00 – 8:00 PM on historic Handy Lane in Pass Christian. John Handy was born in Pass Christian on June 24, 1900 and revered as a versatile musician playing both jazz and the blues.

Handy performed with many legendary blues artists – Punch Miller, Kid Howard, and Big Jim Robinson among others, and recorded with his own band, The Louisiana Shakers, for RCA records. He toured extensively in Europe and Japan.  In 1970 Handy played at the Newport Jazz Festival along with Louis Armstrong and several other all-star Eureka Brass Band and Preservation Hall Jazz Band players. He also headlined the very first New Orleans Jazz and Heritage Festival sharing top billing with Mahalia Jackson.

Handy is memorialized on a Mississippi Blues Trail marker on the corner of Scenic Drive and Davis Avenue in Pass Christian. The marker notes Pass Christian’s rich blues history, “Blues was a key element in the music of Pass Christian’s illustrious native son Captain John Handy and other locals who played traditional jazz or rhythm & blues.”

Pass Christian businessowners Dorothy Roberts of Robin’s Nest in the Pass and Sean Pittman of Cat Island Coffeehouse decided it was time to honor this local blues legend. “Mississippi has a rich blues history and our Gulf Coast contribution is often overlooked,” explains Roberts. “Captain John Handy always returned home here to Pass Christian after touring or recording with various bands. Many in town remember him well.  June is also Handy’s birth month and so this is also a birthday party.” added Pittman.

Music for the free celebration will be provided by Emily Sholes Smith of Della Memoria and Shannon Williford. Authentic barbeque and cold beverages will be offered by the chefs of Cat Island Coffeehouse. Robin’s Nest in the Pass will host the event at their location on the corner of Handy Lane and Davis Avenue in Pass Christian.

“This is an appreciation with outside live music and homemade barbeque to honor the legacy of Captain John Handy and other local blues musicians of the era,” says Roberts. “All are welcome to enjoy the music and food where Handy lived.”

This feature require that you enable JavaScript in your browser.
END_OF_DOCUMENT_TOKEN_TO_BE_REPLACED