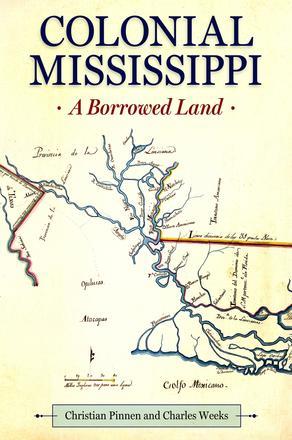 Join Dr. Christian Pinnen has he speaks about and signs Colonial Mississippi: A Borrowed Land at noon on Monday, June 27th at the Pass Christian Historical Society. Pass Books will be onsite with copies of the ook for purchase.

Colonial Mississippi: A Borrowed Land offers the first composite of histories from the entire colonial period in the land now called Mississippi. Christian Pinnen and Charles Weeks reveal stories spanning over three hundred years and featuring a diverse array of individuals and peoples from America, Europe, and Africa. The authors focus on the encounters among these peoples, good and bad, and the lasting impacts on the region.

The eighteenth century receives much-deserved attention from Pinnen and Weeks as they focus on the trials and tribulations of Mississippi as a colony, especially along the Gulf Coast and in the Natchez country. The authors tell the story of a land borrowed from its original inhabitants and never returned. They make clear how a remarkable diversity characterized the state throughout its early history.

Early encounters and initial contacts involved primarily Native Americans and Spaniards in the first half of the sixteenth century following the expeditions of Columbus and others to the large region of the Gulf of Mexico. More sustained interaction began with the arrival of the French to the region and the establishment of a French post on Biloxi Bay at the end of the seventeenth century. Such exchanges continued through the eighteenth century with the British, and then again the Spanish until the creation of the territory of Mississippi in 1798 and then two states, Mississippi in 1817 and Alabama in 1819. Though readers may know the bare bones of this history, the dates, and names, this is the first book to reveal the complexity of the story in full, to dig deep into a varied and complicated tale.

Complexion of Empire in Natchez: Race and Slavery in the Mississippi Borderlands (Early American Places #23) (Hardcover)

This feature require that you enable JavaScript in your browser.
END_OF_DOCUMENT_TOKEN_TO_BE_REPLACED