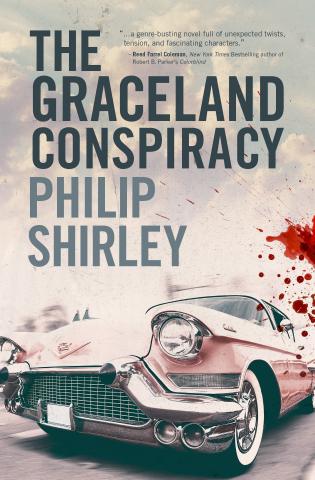 The Graceland Conspiracy delivers a coming-of-age story wrapped in a crime thriller. A rebellious young man becomes caught in a 1990s conspiracy in which the government will stop at nothing to prevent the release of sensitive information about a 1970s crime that could still bring down many powerful government figures and rewrite American pop-culture history.

Matt Boykin had left Birmingham as a young college student and had gained seven years of street savvy working blue collar jobs on the West Coast and Texas. Then one night, a stranger in a suit helps Matt out of a tight spot in a Texas bar fight and whisks Matt away. The stranger hands Matt a card and tells him to call home. Matt’s father is in a coma and near death. Estranged all those years from family and friends, Matt arrives home a different person. His father dies soon after Matt’s return but not before whispering clues for Matt to locate evidence that will later reveal the truth behind the death of an American music icon. When Matt comes home from the store and discovers his mother’s staged suicide, he suspects both deaths were hits.

Matt soon locates the items his father hid for him, and the facts are revealed layer by layer. As a child, Matt thought his father was a low-level clerk in the National Security Enforcement Organization, but that story had been a cover. As Matt draws closer to the truth, an old school friend helping Matt is murdered, and Matt barely escapes. When government agents close to the case die, Matt is blamed for their deaths.

With nowhere else to turn, Matt pairs up with former high school girlfriend Kristine who soon discovers her reunion with Matt has irrevocably altered her life. Using his street savvy, Matt drags Kristine first to Mexico, then to Belgium and Germany, and finally to Venice where the couple is tracked down. They escape death when a powerful new ally takes them into deep cover. Not realizing an enemy is among them, the couple struggles to regain control of their lives by exposing the truth about what really happened to America’s most beloved entertainer.

“Philip Shirley’s latest page-turner is preposterously entertaining … and Hollywood-ready. From Texas pool halls to Alabama hide-outs to Mexico, Munich, and Venice, this couple-on-the-run tale of government heavies and Elvis intrigues takes more turns than a Hound Dog 45 rpm from 1956. You’ll be tempted to pick up the phone and spoil the last-page surprise for your reading pals … but don’t be cruel.”

Charles McNair, Author of The Epicureans

“Prodigal son meets government deception meets murder mystery in Philip Shirley's latest. Chock full of dead bodies, men in suits, and a grainy film that just might lead to one of the biggest conspiracies of a generation, The Graceland Conspiracy is crazy good fun, a pacey, globe-trotting thriller with a Southern twist.”

“Elvis has left the building … or not. Philip Shirley’s Graceland Conspiracy is a genre-busting novel full of unexpected twists, tension, and fascinating characters.”

“Philip Shirley is a terrific writer, better with each new book.”

“. . . an ingenious mystery . . . fans of thrillers and Elvis alike can have reason to believe their expectations will be well-received in The Graceland Conspiracy.”

This feature require that you enable JavaScript in your browser.
END_OF_DOCUMENT_TOKEN_TO_BE_REPLACED