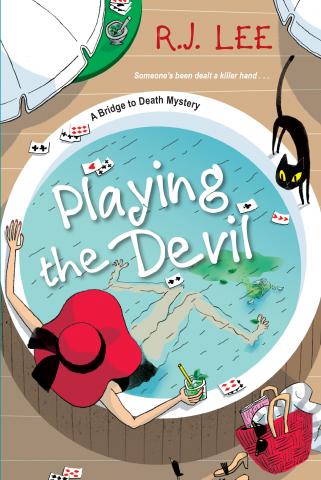 PLAYING THE DEVIL is the second installment of Southern author R.J. Lee’s Bridge to Death Mystery series starring Wendy Winchester, a reporter for The Rosalie Citizen and bridge player who has gotten good at placing ace detective. With her sometimes-boyfriend detective and local chief of police father, Wendy has the perfect hand to be an amateur sleuth—including cracking the case of the murder of a uncouth Rosalie Country Club member.

With its small-town setting, scandal, and romantic sub-plot, fans of Southern fiction and cozy mystery authors like Peggy Webb, Krista Davis, and Gretchen Archer will love R.J. Lee’s protagonist Wendy Winchester—and will want to play bridge with the rest of the zany characters in the fiction town of Rosalie, Mississippi.

ABOUT THE BOOK Now an investigative reporter for the Rosalie Citizen in the Mississippi River port of Rosalie, Wendy still likes to unwind over a game of cards. Following the demise of the Rosalie Bridge Club, she's started her own group at the Rosalie Country Club. During the first meeting of the Country Club Bridge Players, the dummy has barely been laid down when another dummy gets in a scuffle at the bar across the room. Bridge player Carly Ogle's husband Brent is at it again.   After the club's new female golf pro breaks up the fight, Brent storms off to soak in a hot tub. But Carey soon finds the bullying Brent dead in the water, clubbed over the head with the pestle the barkeep uses to crush leaves for mint juleps.   Racist, sexist, homophobic, and an all-around lout, Brent made enough enemies to fill a bridge tournament. Wendy has to play her cards right to get the story—and stay out of hot water to put the squeeze on the killer . . .

ABOUT THE AUTHOR R. J. Lee follows in the mystery-writing footsteps of his father, R. Keene Lee, who wrote fighter pilot and detective stories for Fiction House, publishers of WINGS Magazine and other pulp fiction periodicals in the late ’40s and ’50s. Lee was born and grew up in the Mississippi River port of Natchez but also spent thirty years living in the Crescent City of New Orleans. A graduate of the University of the South (Sewanee) where he studied creative writing under Sewanee Review editor, Andrew Lytle, Lee now resides in Oxford, Mississippi.
PLAYING

Playing the Devil (A Bridge to Death Mystery #2) (Paperback)

This feature require that you enable JavaScript in your browser.
END_OF_DOCUMENT_TOKEN_TO_BE_REPLACED