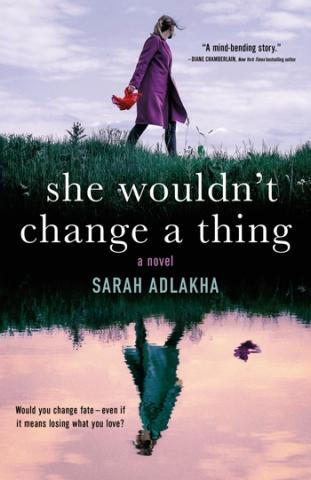 Meet debut novelist Sarah Adlakha as she signs She Wouldn't Change a Thing on Tuesday, August 10th from 5:00 - 6:00 PM at Pass Books. This is the official national launch and publication date for this highly praised new work of fiction set on the Mississippi Gulf coast. Sarah Adlakha is a native of Chicago and a practicing psychiatrist who now lives along the Gulf Coast of Mississippi with her husband and their three daughters.

A second chance is the last thing she wants. When thirty-nine year old Maria Forssmann wakes up in her seventeen-year-old body, she doesn't know how she got there. All she does know is she has to get back: to her home in Bienville, Mississippi, to her job as a successful psychiatrist and, most importantly, to her husband, daughters, and unborn son. But she also knows that, in only a few weeks, a devastating tragedy will strike her husband, a tragedy that will lead to their meeting each other.

Can she change time and still keep what it's given her?

Exploring the responsibilities love lays on us, the complicated burdens of motherhood, and the rippling impact of our choices, She Wouldn't Change a Thing is a dazzling debut from a bright new voice.

"Adlakha's debut is a truly compelling read, making the reader consider what they would do if offered a second chance, how they might deal with an impossible choice, and what is most important in life. The characters are relatable, the story is gripping, and the blend of domestic fiction with a hint of science fiction is just plain great." --Booklist (starred review)

"For me, a mind-bending story only works if its characters are real and relatable. Sarah Adlakha gets it exactly right in She Wouldn't Change a Thing. Her protagonist, faced with impossible, life altering choices, will keep the reader awake at night wondering 'what would I do?'" --Diane Chamberlain, New York Times bestselling author of Big Lies in a Small Town

She Wouldn't Change a Thing (Hardcover)

This feature require that you enable JavaScript in your browser.
END_OF_DOCUMENT_TOKEN_TO_BE_REPLACED