Sonia Purnell Speaks About and Signs "A Woman of No Importance" 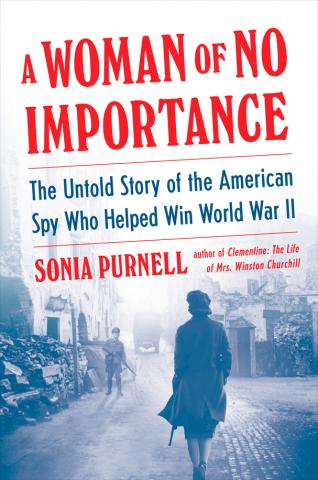 Direct from London, author Sonia Purnell will speak about Virginia Hall, the subject of her recent book, "A Woman of No Importance." The presentation and book-signing will be held in the community room of the Pass Christian Library at 111 Heirn Avenue. Ms. Purnell will speak at 6:00 PM.
In 1942, as World War II was raging, the Gestapo sent out an urgent message: “She is the most dangerous of all Allied spies. We must find and destroy her.” That spy was Virginia Hall, a young American woman who—rejected from the Foreign Service because of her gender and prosthetic leg— talked her way behind enemy lines in occupied France and went on to become one of the greatest (and most unlikely) spies in U.S. history.

Much of Virginia’s story has been lost to the annals of history until now. Journalist Sonia Purnell has done incredible research to uncover her life, and the result is the fast-paced and intriguing A WOMAN OF NO IMPORTANCE: The Untold Story of the American Spy Who Helped Win World War II.  Purnell, whose bestselling biography "Clementine" illuminated the life of Clementine Churchill, here takes as her subject another important and shockingly overlooked heroine of the Second World War. The book has been optioned for film by Bad Robot (J.J. Abrams’ production company) for Paramount Pictures, with Daisy Ridley (Star Wars: The Force Awakens) set to star.
Born to a wealthy family, Virginia Hall was charming, ambitious, and rebellious from the start. Ignoring her parents’ wish for her to settle down and marry rich, she instead pursued a career in diplomatic service. But at twenty-seven, a hunting accident took her left leg and nearly her life – all but crushing her career aspirations. Ever determined, Virginia made her way to the front lines of World War II, first by driving ambulances for the French army and then by joining SOE, a British spy division dubbed “the ministry of ungentlemanly warfare.” In an almost insane gamble, the one-legged thirty-five-year-old desk clerk was dropped into occupied France on a blind mission – but she turned out to be more than up to the challenge.
Virginia quickly established a network of spies to blow up bridges and track German troop movements; she recruited and trained guerilla fighters, arming them with weapons she called in from the skies. As “the limping lady of Lyon” and later “the Madonna of the Mountains,” she became legend. Eluding the Nazis hot on her tail, her face covering WANTED posters throughout Europe, Virginia refused orders to evacuate. Finally—her cover blown and her associates imprisoned or executed—she escaped in a grueling hike over the Pyrenees into Spain. But, adamant that she had “more lives to save,” she dove back in as soon as she could, helping lay the groundwork for the Allied liberation of France.

A WOMAN OF NO IMPORTANCE is a real-life spy thriller, full of exhilarating wartime drama— including daring prison escapes, code names and cover stories, and even some James Bond-style tricks of the trade. But Virginia’s tale is undoubtedly unique. At a time when women and disabled people were often discounted or relegated to the background, Virginia overcame bias and outright hostility, and never asked for a speck of praise for the many years she spent risking her life. Her efforts not only helped to turn the tide of the war, but changed espionage and views of women in warfare forever. With a knack for storytelling and a deep appreciation for her subject, Purnell shines a light on Virginia’s heroism, and illuminates a nimble, intelligent, charming, and deeply patriotic woman who enchanted everyone she met. A WOMAN OF NO IMPORTANCE finally gives Virginia her due, bringing to life both the spy and the woman in a richly detailed, sharply written, and thrilling adventure.
Event date:
Tuesday, October 22, 2019 - 6:00pm to 7:30pm
Event address:
111 Hiern Avenue
Pass Christian Library
Pass Christian, MS 39571

A Woman of No Importance: The Untold Story of the American Spy Who Helped Win World War II (Hardcover)

This feature require that you enable JavaScript in your browser.
END_OF_DOCUMENT_TOKEN_TO_BE_REPLACED